In October, award-winning writer Lesleyanne Ryan published her debut novel, Braco. At the time, I interviewed Ryan about her publishing experiences. Last week, I had the great privilege of sitting with her again to discuss her Atlantic Book Awards nomination, her blog tour and life as an author. (At the end of this blog, you’ll have a chance to enter to win a signed copy of Braco, so read on!) 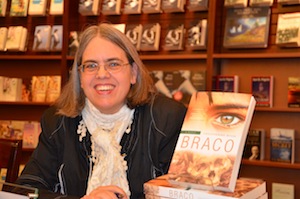 About Braco: As a former UN peacekeeper, Lesleyanne served in Visoko, Bosnia in 1993/94.  There she helped a friend send food to a young boy in Srebrenica.  When the Canadian military pulled out of Srebrenica in March 1994, he sent her a green licence plate from the town as a gift.  In the years that followed, Lesleyanne often wondered whether he survived the fall of Srebrenica in 1995.  Grounded in historical events, Braco is her exploration of the boy’s possible fate.

For the past five weeks, you’ve been touring the blogs of other Newfoundland writers to talk about Braco. (See below for links to these interviews.) What has that experience been like for you?

It has been an amazing experience and greatly exceeded my expectations. I’m new to the blogosphere and getting this chance to see what can be done has been eye-opening. It’s essential for authors to not only be promoted by their publishers but to take an active role in promoting themselves and the blog tour is a great self-promotional tool.

So, what do you think about the promotional part of publishing?

As I always say now, writing the book was the easy part. I recall the first time I sat down at a signing table at a local bookstore. For the first ten minutes, I sat there watching the shoppers walk by and I realized they were going out of their way to avoid eye contact. All I could think was that if it was going to be like this, I was never going to write another book again….LOL.

But it got better and I love talking to people about it. Not all will buy the book and that’s fine. I just love the chance to tell them about it. I also love the chance to speak to people who’ve already read the novel – like at book clubs – because it’s a great chance to have a back and forth conversation about the content of the book.

When UN soldiers offered this boy apples, he fed them to his horse rather than eat them himself.

Braco won the Fresh Fish Award in 2011 and has now been nominated for the Margaret and John Savage First Book Award category of the Atlantic Book Awards. How does it feel to be an award-winning debut novelist?

I can’t really say it’s a dream come true because I never dreamed I’d win any awards, so I am really humbled by every nomination and win. I guess the awards are really an affirmation that what I’m doing works, and as a debut novelist, that is what I want to hear.

Do these award nominations put extra pressure on you now that you’re working on a second novel?

No, I’m not feeling too much pressure. I just want to strive to do the same thing I did with Braco – follow the same formula that made it work and hopefully produce something as successful.

UN Convoy on a break after running the front lines.

What kind of feedback have you been getting from readers? Critics?

The feedback has been amazing. Critics reviews have been wonderful and I’m in awe every time I see a reader’s review posted to Goodreads, Chapters or Amazon. I hope readers know just how much an author appreciates the time they take to post a review.

When I get a chance to talk to people who have read the novel, the one thing I like to ask is which character they identified with and how it made them feel. I’ve gotten a wide range of responses and it often relates to their own background whether they’re a mother, a vet or just an avid reader who knew nothing of the conflict. It seems to me that my readers really come from all ages and backgrounds and not all of them are local. For example, I’ve had feedback from a mother in the US, a teacher in Toronto, a librarian in Ottawa, a vet in Quebec, a grandmother in BC and a writer in Australia.

The Atlantic Book Awards will be held in Halifax, Nova Scotia on May 16, 2013. For more information about Lesleyanne Ryan, please visit her website: www.lesleyanneryan.com

To read the interviews on Lesleyanne’s blog tour visit:

To enter to win a signed copy of Braco, simply leave a comment on this blog (below) and tell me why you’d like to have this book, or why you think it’s important for writers to explore issues like the fall of Srebrenica. If you’ve already read Braco, tell me what you thought about it.  The contest will remain open until midnight, May 23, 2013 with the winner being announced on this blog on Friday, May 24, 2013.

Here’s a video of Lesleyanne Ryan reading from her award-winning novel, Braco.  Good luck at the Atlantic Book Awards Lesleyanne!